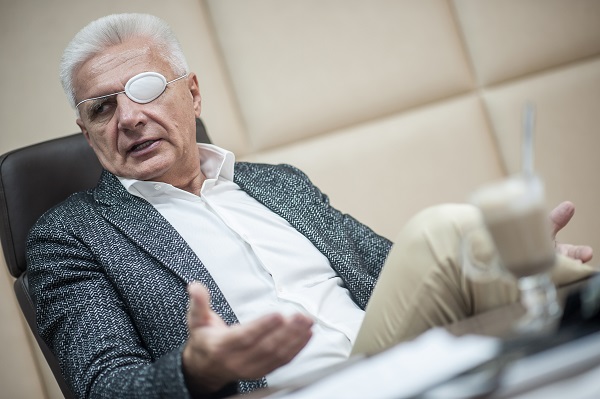 An interesting CD landed in my hands. The Awakening titled symphonic rhyme’s cover notes the candy maker businessman as composer. Conversation with Joseph Felföldi businessman, who produced a CD by working together with the Kodály Philharmonic Orchestra.

At the mention of the name Joseph Felföldi, the first idea that pops into people’s minds are the great varieties of sweets and the liquid flavouring straws, not only in Hungary, but abroad as well. His products are popular in nearly 70 countries, but it is also well-known that he had been litigatin for his products’ patent for more than 7 years with an Australian company, which had simply stolen Felföldi’s invention. The Spanish, German, British and South-Korean courts all served him justice except for the Hungarian judge. Felföldi, however, fought as hard as stubborn he is, until won at the Hungarian court as well.

Joseph Felföldi: There was an occasion when a similar case have happened, when the idea of the moving windshield wiper was stolenby the Ford, although in that case the inventor got 20 million dollars after like 30 years. As compared to that, I got away with only 7 years going to court.

Other than your stubbornness what gave you strength to fight? Faith?

J.F.:I think so. There must be something above us… I never ask for anything, I always give or receive. I usually say that God plays poker with me and for my sins, he makes my dreams come true – but each time I need to work harder for that. Not a bad punishment. I do believe, of course, but not the way that I go to church, listen tot he mass and I ask God to give me this or that. I respect everone’s religion, up until it is not orthodox, fanatism, that I do not like. Faith gives hope to people, however, if I ask God for something, that is serious. I do believe that just because I go to the bank, I won’t be rich, if I just think of a steak, it won’t appear, that is we need to work hard for everything! Just beacuse we exist in a way we do, we do not own life. When we are born, our life is like an empty parchment that we need to fill with meaning.

J.F.: I have always claimed that among my aims I can be the only distance – that is I cannot be influenced. Our problems are generated by us, so it is us who needs to solve them. If we need help, it is not going to work. I do believe that the fate, or God – call it what you want – works in a way that the horizont needs to be lifted each time and not being escaped underneath. I say that if I am the cleverest, richest person in a room, then I look for another room. That is, in the evening I always go to bed as the richest person, and in the morning I wake up as the poorest. Do it from the beginning! If the competitors run 100 kms a day, then I must run 120kms. And then there will be no problem. My opinion about products is that we need to make something that makes buyers to enjoy them. I would ever sell a spoilage, I put them tot he trash immediately. I can manufacture spoilage, since it may happen, but the buyer should not know about it. So, yes, I am not only a perfectionist, but a specimen as well. As a first communicant, one I heard a priest saying to an 80 years old lady: „ Tell Aunt Julia, not to bring any more stuffed cabbage to his husband’s grave!” And I replied, why not? What’s the difference if she brings stuffed cabbage or flowers? He cannot smell either. So there is not actual difference between flowers and stuffed cabbage.

How did you get acquainted with music?

J.F.: In my childhood, I had been dreaming about many things, I was interested in the entertainment industry, and acting within that. This latter aim of mine had been impeded by my accident. At the age of 15, children threw snowballs around me, and one of the kids hid a small iron ball in one of the snowballs, and when he fired the ball with a sling, it hit my left eye. The doctors tried to save it, but couldn’t, and then and there my older sister gave me a guitar, this is how music entered my life. Composing is catharsis for me. I am like a painter, who paints his „visual sounds” on an empty canvas with the help of brushes and colours. I achieve the same with music: I mediate emotions and even passions, with the most transcendental form of art. Besides, it is a form of relaxation for me as well: music is my silence. Hereby, I got to know such a complex metacommunicational system that cannot be resemble anything. Words have no power here, no international signs.

What is your ars poetica?
J.F.: A line from one of my verses: „ I fly up tot he sky, up to the stars, and if you’d see me falling, into the ground till knee-deep, the ground shakes, but I stand still.”


The interview is available in full-length on HAON online magazine in Hungarian language!


Categories: Felfoldi news Tags: Joseph Felfoldi, interview, literature, music
If you liked this article, don’t forget to share it with your friends
Tell us what you think